These maple cinnamon rolls with maple cream cheese frosting are light and fluffy and the perfect morning treat! Make sure to serve it warm for the best taste!

Homemade cinnamon rolls are one of my favorite breakfast treats! Yes, they require time, letting the dough rise, but overall they’re not too complicated and they are so much better than store bought that it’s worth every bit of that time & effort. I often make cinnamon rolls for myself for Mother’s Day and my birthday, because they’re my fav and I know having Mike pick some up from the store just won’t be the same! And we always have cinnamon rolls on Christmas morning!

With a recent visit to a local maple farm to stock up on syrup, maple has been on my mind and I really wanted to try making maple cinnamon rolls. Plus maple just feels like a cozy fall food, even though maple season is early spring. This recipe doesn’t vary too much from my original, but is perfect for maple lovers! There’s both a little maple in the filling and in the frosting – and maple cream cheese frosting is just sooo good, you’re going to want it on everything! 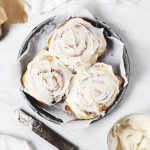 *for a more pronounced maple flavor, in the filling use 2 tablespoons of ground cinnamon instead of 3

For more delicious breakfast or brunch treats, try these French Breakfast Puffs, Easy Everything Bagels and this Cinnamon Swirl Bread.