I’m big into brownie recipes – I love the look of cakes but I’ve never actually been a big cake person. (Except Wegman’s Ultimate White, of course.) So these mini brownie cakes are my actual dream dessert! It’s a bit unhealthy how much of these I’ve already ate. 😂

Manda introduced me to the Ghirardelli boxed brownies and they are sooo much better than the ones I used to make. Now I can’t go back to any other brownie mix. So I started with that as the base – since I never like from-scratch brownies as much because they’re far too cakey or way too involved. Then I researched frosting that wasn’t too sweet but could hold the weight of the brownie layers. And ended up with a flour frosting – this is perfection! I’m usually a whipped cream frosting girl because I don’t like how rich frosting can be. But the whipped cream frosting just smooshed out between the layers haha. This is way more firm but still not too sweet! My cousin said she doesn’t think it’s sweet enough but I could eat the entire bowl – it’s incredible! Plus I think it perfectly balances how rich these brownies are.

I had cranberries on hand but I think pomegranates would be a great garnish for the top and more appetizing to eat with it. Ha! But the rosemary, cranberry and a dusting of powdered sugar make these the perfect looking dessert for any holiday party! Tell me these aren’t just adorable! 😍

What you need for Mini Brownie Cakes: 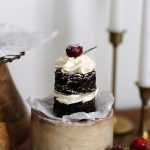