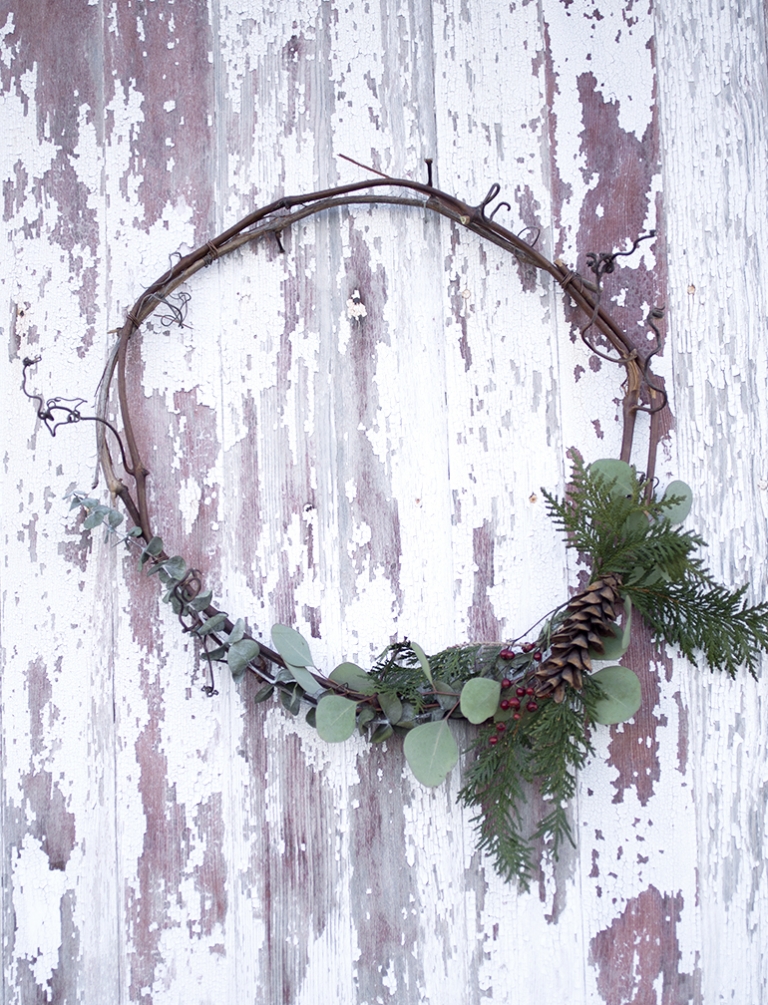 With some foraged grapevine and greenery, we were able to create some beautiful simple Christmas wreaths. They’re easy to put together and bring a simple, natural touch to your Christmas decor.

It’s the first time I’ve made my own wreaths and I was surprised at how easy it was. (These are pretty simple though, which is the look I was going for, obviously the more you add, the more time & effort it will take). We were able to gather our grapevines and greenery from the back yard and nearby woods; as well as use our Christmas tree clippings and a few stalks of eucalyptus from a bundle we already had. We had the rest of the supplies on hand, so it didn’t cost anything to make them. If you don’t have access to grapevine, you can buy pre-made grapevine wreaths at craft stores and go from there. 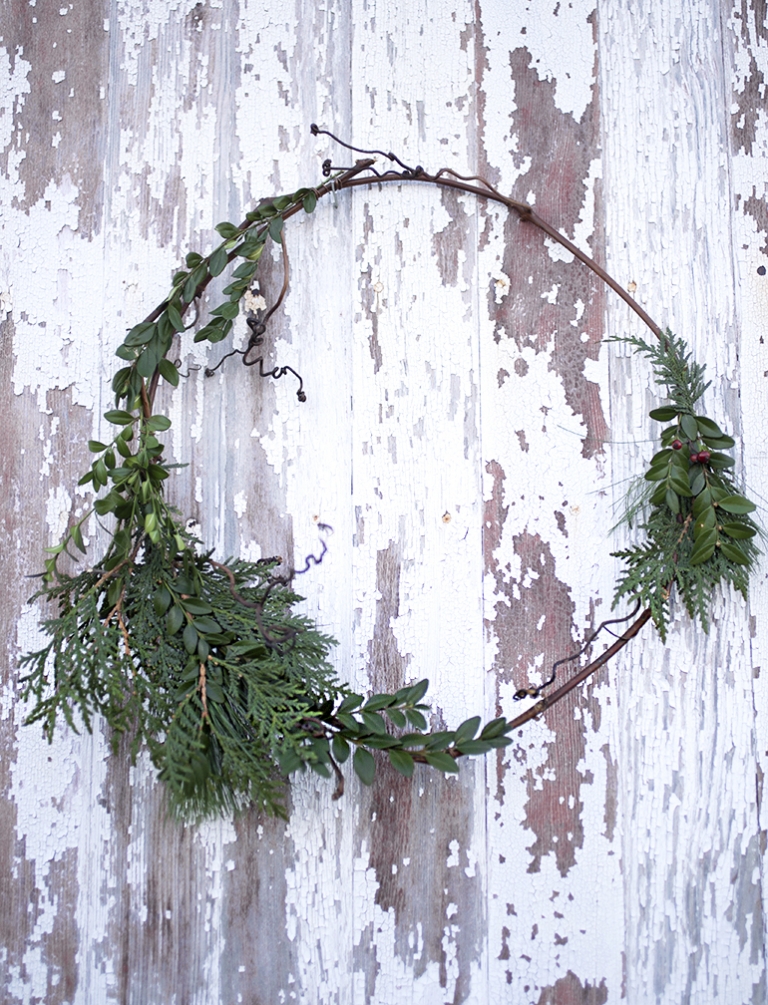 You know what would make a fun blog? One about bloggers & blogging – one that captures all the behind the scene shots & chaos of what goes on to create a post.  No pretty pictures, just the mess, craziness, frustration and utter chaos blogging can sometimes be.  Or maybe it could be a reality tv series. Especially bloggers with kids…oh the joys of trying to create & shoot with little ones running around. And the mess that ensues when you’re in the middle of a project and someone stops over at the house – yikes! When I’m in the midst of it, I can sometimes feel stressed & frustrated, but looking back on it, I can see the humor and entertainment of it all too!

Lately I’ve had the bloggin’ blues. I’ve been feeling frustrated with how projects have been turning out, or photos turn out – or both. Which leads to feeling uninspired and unmotivated…until the next project pops into mind and I’m ready to go, and then the cycle starts again! I had actually planned on making & posting these wreaths a lot earlier, but kept putting it off because I didn’t want to invest in another project that was just going to feel like a fail. But finally the time had come – actually I just really wanted some simple, natural Christmas decor around the house, so I went for it. It was going pretty well, I was enjoying the making, Levi was playing nicely (and kept getting tangled in the grapevine, but he amused by it) and I was feeling like maybe things might turn out okay. It was pretty messy – when Caitlin came in, I was sitting in the kitchen with half of the floor and furniture covered in greenery & grapevines. She jumped into the chaos and started making hers, and all was merry & bright. Well, maybe not so bright, it was getting dark by the time we were done, so I set the wreaths aside to shoot the next day. 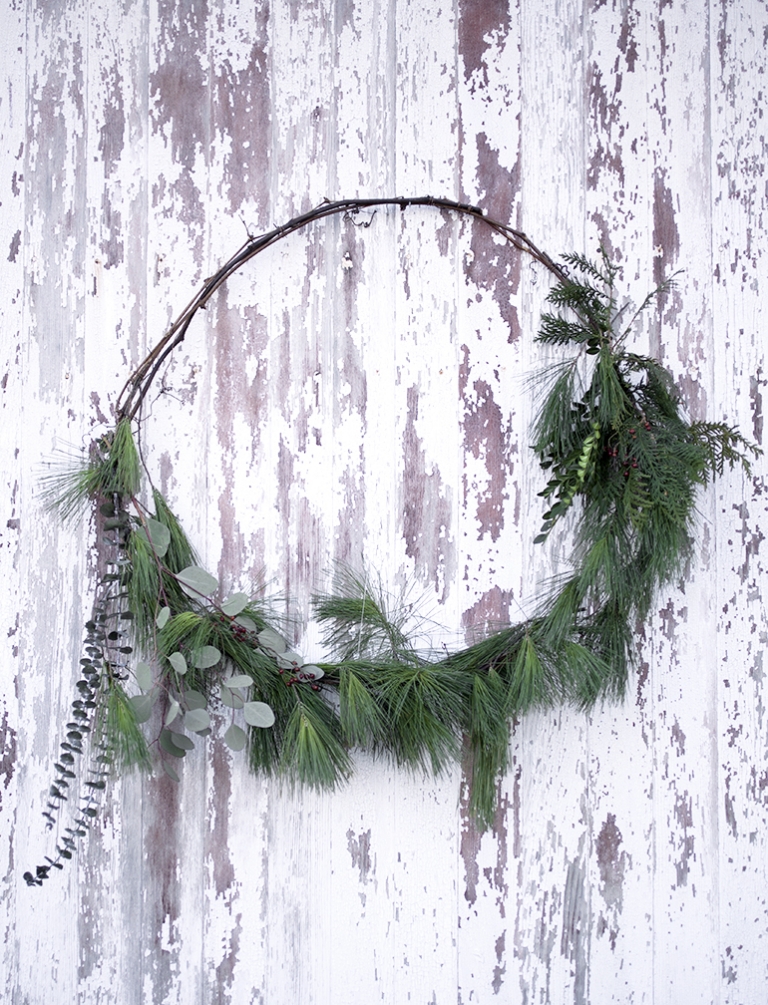 And that’s when things started to go downhill.  First, one of the boys broke one of the wreaths.  Thankfully, these wreaths are easy to work with and I had lots of greenery left over, so I was able to fix it. Then it came time to photograph them.   First I was going to shoot the wreaths individually (kind of boring), then planned on arranging a few of them together for a group shoot  (better).  Other than dealing with a lot of wind, the first shots went okay.  Then, I was about to put in a couple more nails to hang them together when a big gust of wind came and blew away my baggie with the nails in them!  I chased the bag down, but the nails had been dumped, in the hay scattered on the ground…talk about looking for a needle in a haystack!  I searched for awhile, but no luck.   I wasn’t at home and had no more nails with me, and had another shoot I needed to do with Caitlin coming up, so I called it quits and got back in the van.  And then got stuck in the mud. (Insert cry face, whine face, and frustrated face emojis here).  Ughhh. Thankfully I was able to eventually work my way out of it without needing to call Mike to come tow the van out.  And so today’s post features slightly boring, single shots of windblown wreaths.  Because I just don’t have time to keep reshooting projects until it’s just right. Like I tell the boys, ya get what ya get and ya don’t throw a fit. (I really wanted to throw a fit!) But now, looking back on it, I can see how entertaining that would have been if someone was photographing or filming me trying to shoot these wreaths! Searching through muddy straw for itty bitty nails, getting my van stuck in the mud… 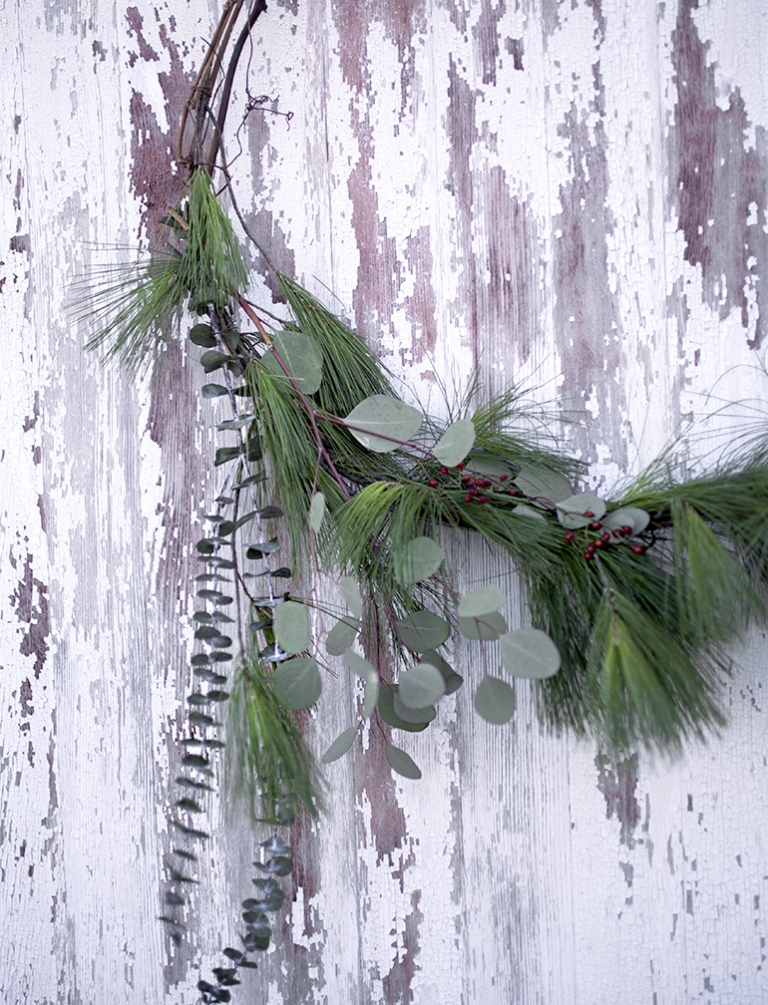 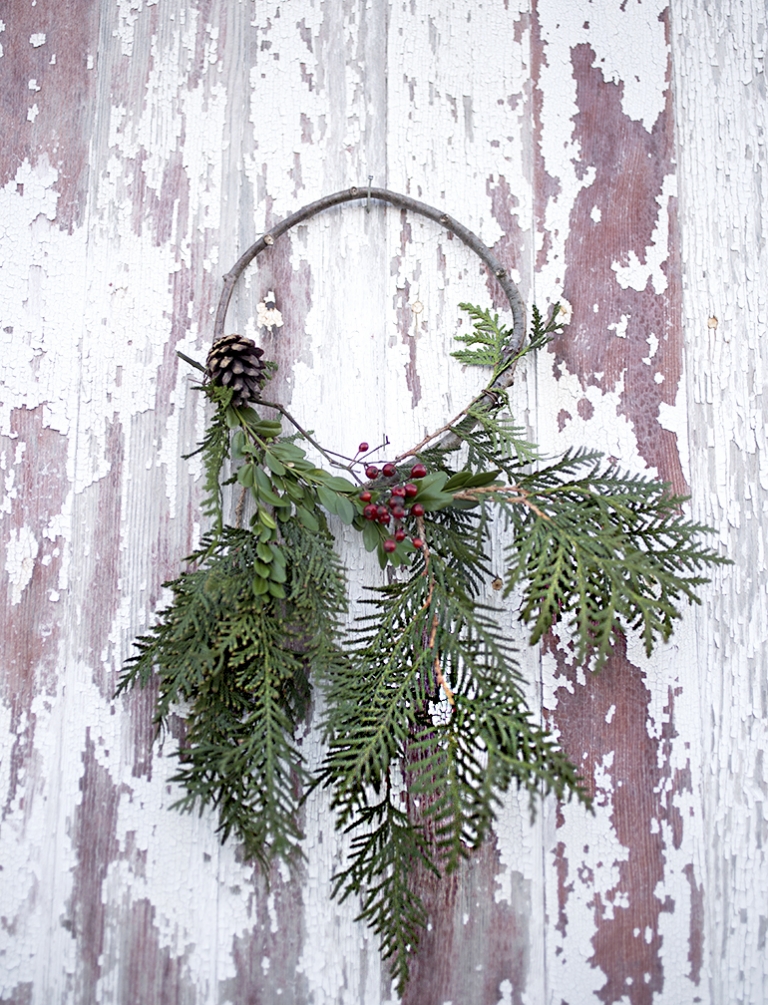 The little wreath above was made a bit differently from the steps below. It was just one branch with some greenery on it that I formed into a circle and secured with wire. Then I added a few more things to it and that’s all.  I think it looks a bit like a dreamcatcher and would look cute hanging in a kid’s rom to bring a bit of Christmas into their bedrooms! 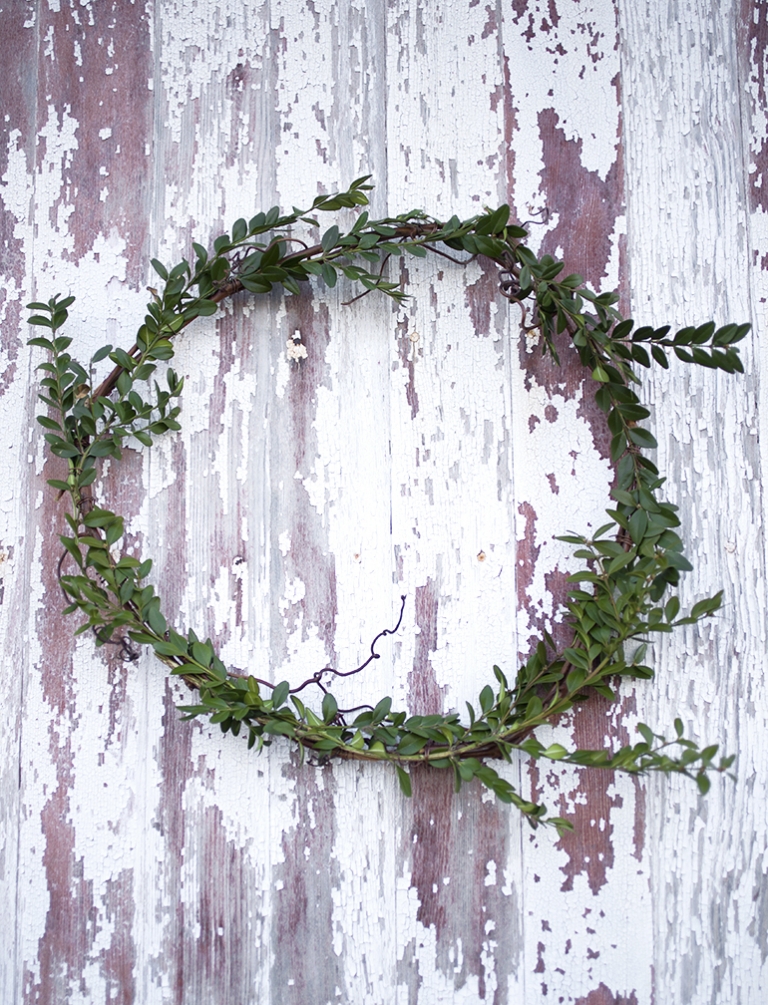 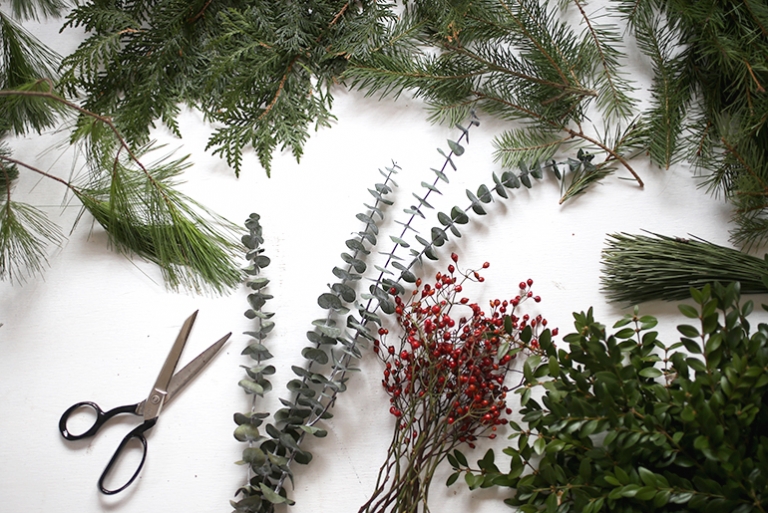 Take a length of grapevine and form it into a circle the size you’d like, making a few layers. Wrap wire around vines to secure the vines together. Start adding pieces of greenery to the wreath, securing those with wire. For smaller pieces, or to avoid having every bit of your wreath covered in wire, use hot glue.

I like to hang my wreaths by just placing on a nail, but you can also loop ribbon through the top of wreath and hang it from that. 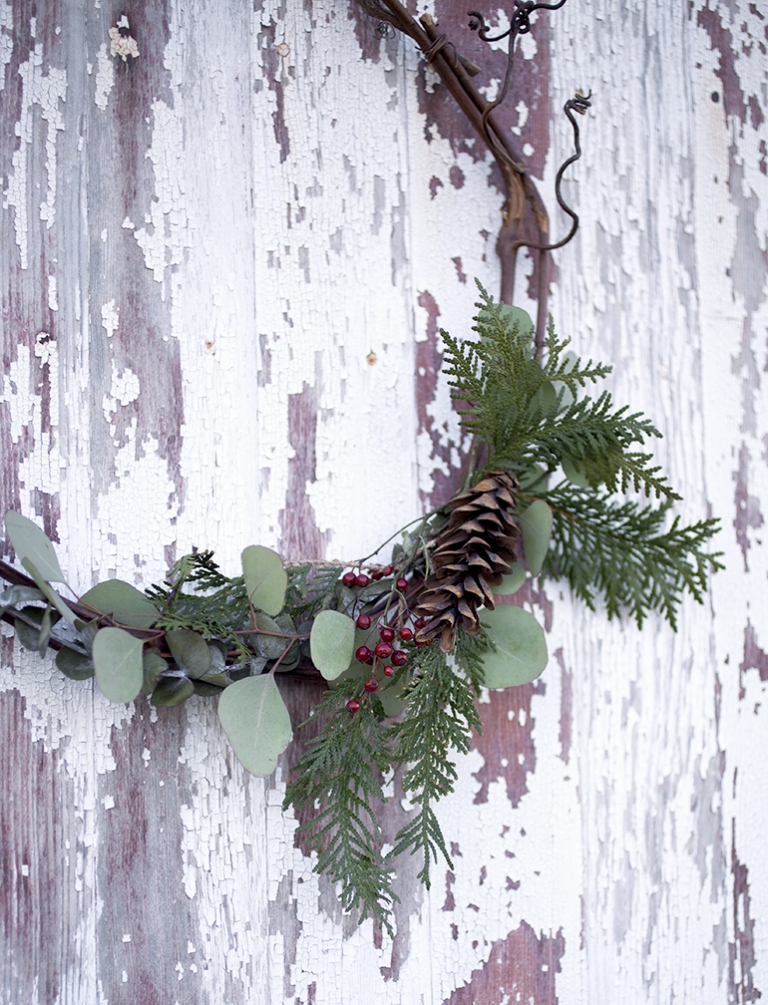 (I feel like I must add, I do love blogging. I wouldn’t keep doing it if I didn’t. But as with most things in life, there’s going to be times of frustration and stress and maybe feeling uninspired.  I’m just sharing a bit about that side of things, but don’t think that I hate doing this or just force myself to do it for some odd reason.  I love it, I love that it brings out creativity in me I didn’t think was there and challenges me to keep growing & trying.  And I love looking back and having these projects and moments documented.  But I feel like it’s good to share it all, the pretty, the inspiring, the frustrations and the messes.)

Have you ever made your own wreaths? Do you like going all out with Christmas decorations or keeping it simple?

Who else has spent way too long looking for the *p