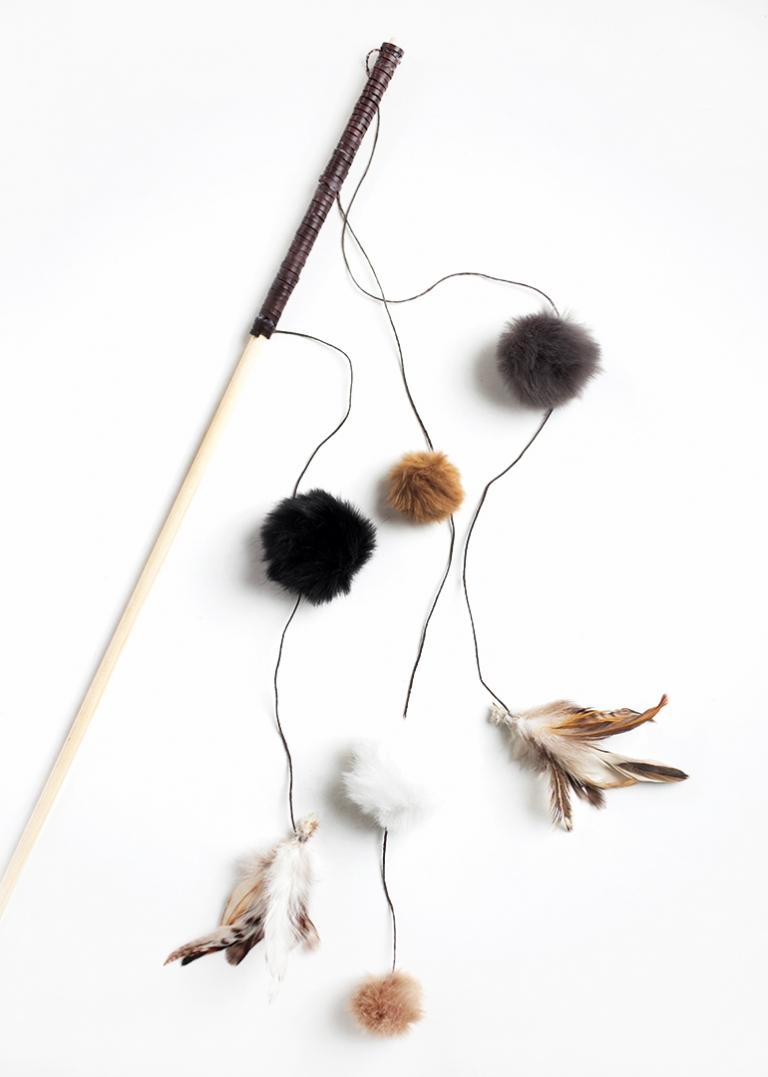 this idea
Last spring, we had a stray cat show up on our doorstep and he hasn’t left yet. He spent the warm months living on our porch and quickly became the boys companion – following them around whenever they were outside playing. While I was content to continue being pet-free, I’m a sucker for cats and once the cold weather came, took him to the vet to get checked out & “cleaned up” and he was allowed in. So now I guess we’re officially cat owners. The poor guy doesn’t really have a real name, although I call him Kitkat and that’s his official name for vet visits, but the boys couldn’t decide on a name for him (we actually had a whole naming process where everyone got to pick their top two names, write them down & place them in a bowl. We passed around the bowl, taking out names and the last name left was supposed to be his name, but sobbing ensued at the last choice left and so I declared everyone could just call him whatever they wanted). He’s a great cat, puts up with the boys and he’s potty trained – as in prefers to go outside and doesn’t use his litter box – thank you Kitkat! The boys are slightly scared to play with him, he’s got some serious claws on him (he still goes outside, so he gets to keep those), so I thought we needed a toy that the boys could use and not have to worry about getting swiped by a stray claw.
This cat wand is perfect, letting the boys play with Kitkat, but keep their distance, ha! It was quick & easy to put together (although I might have gotten a little carried away with the hot glue gun a time or two!). The pompoms were from a couple keychains that I found at Michaels and they’re perfect for this because they had a little loop on them so they were super easy to attach to the string. And Kitkat seems to like it, when he’s in the mood to play! 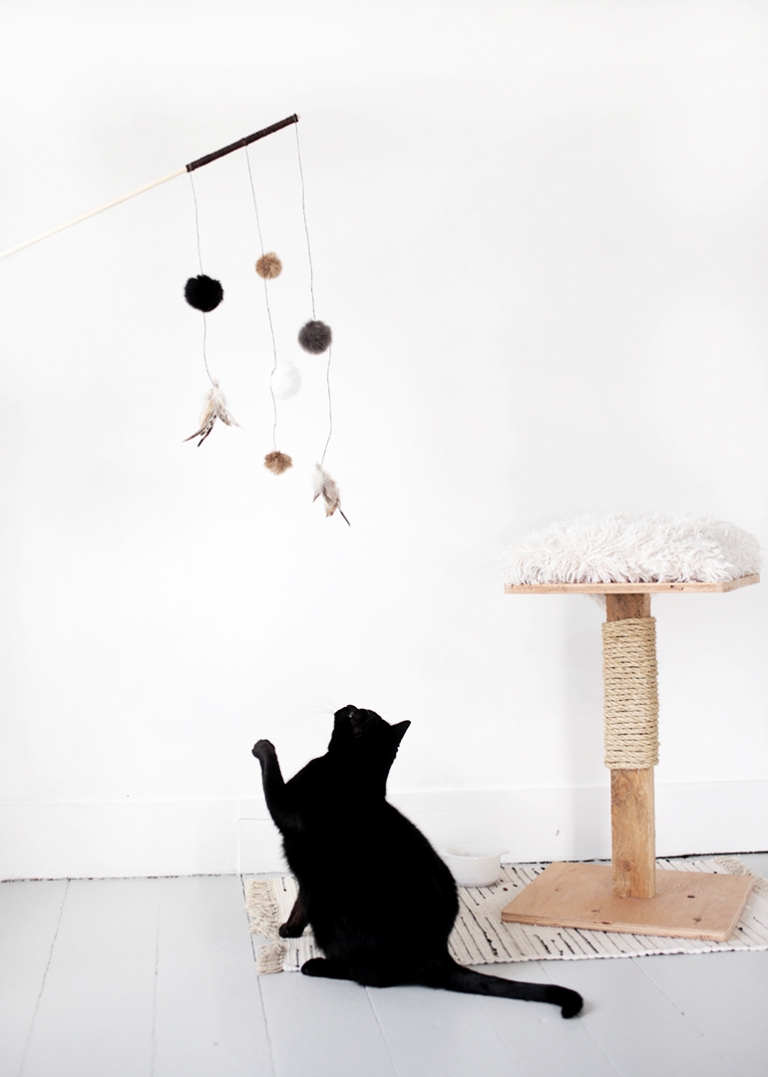 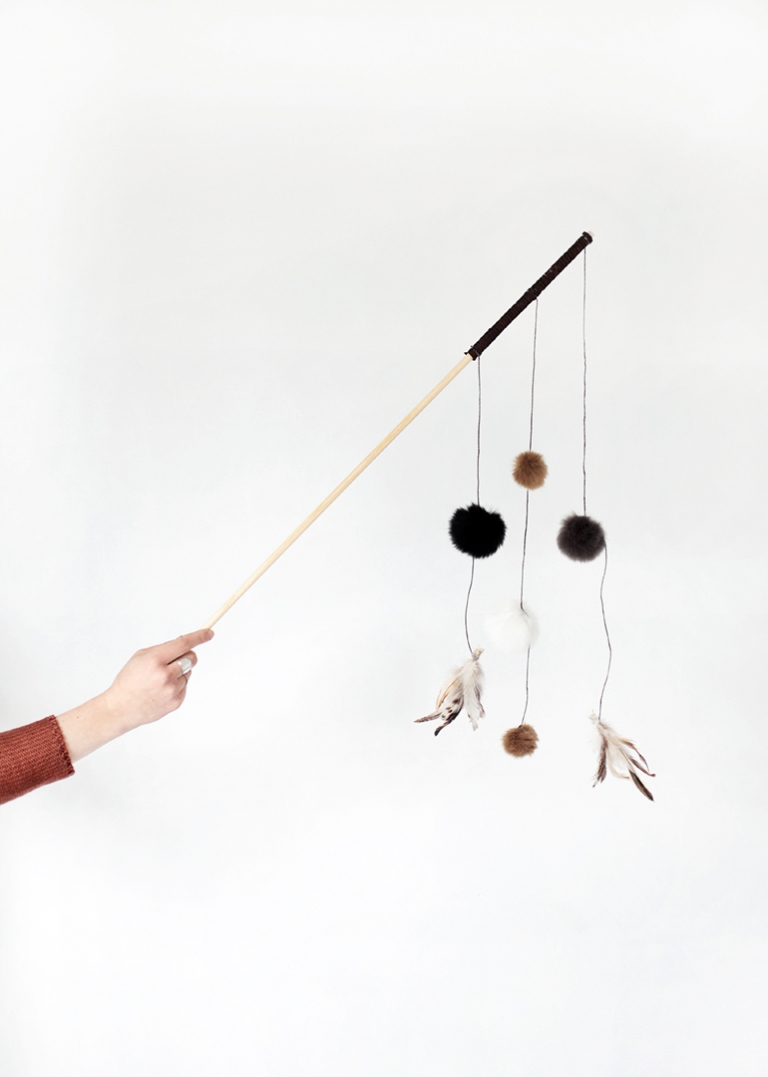 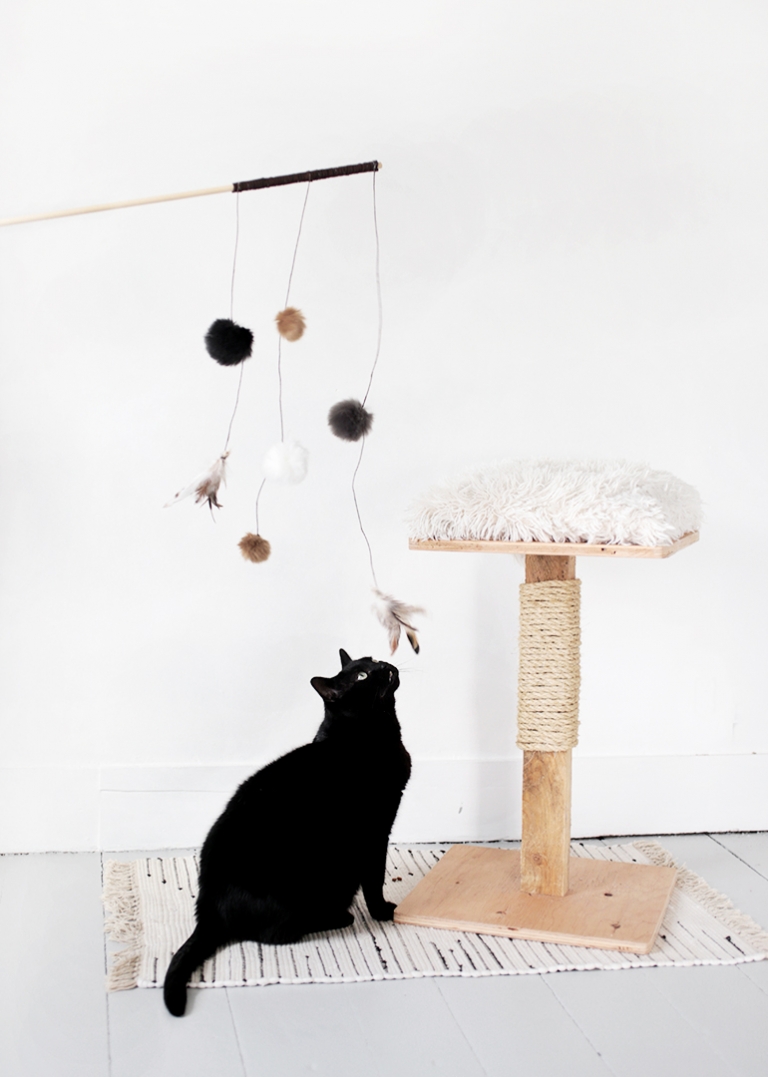 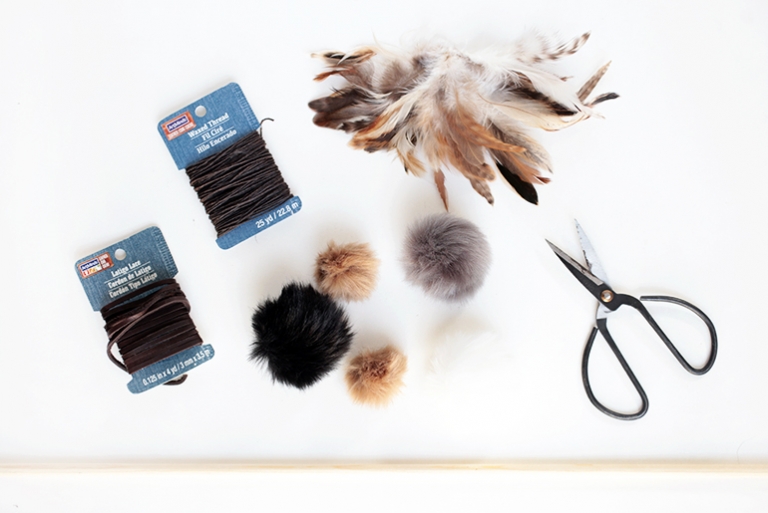 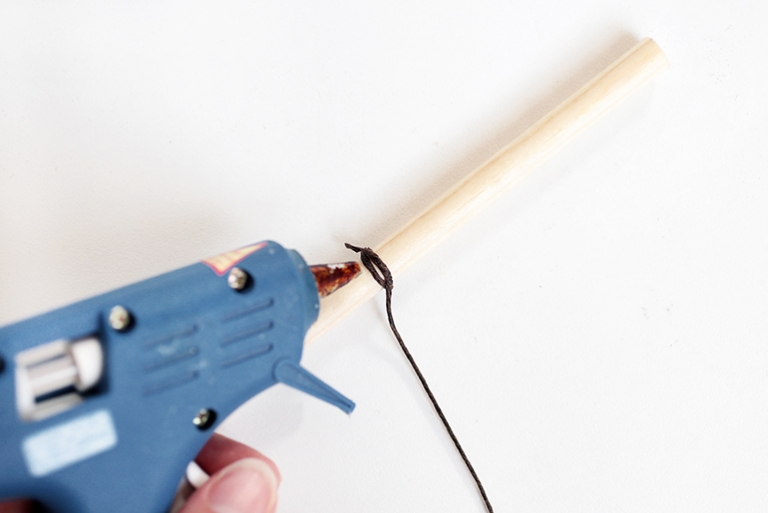 Directions: If needed, cut dowel to size. Cut 2-3 pieces of waxed thread, various sizes. Attach feathers and pompoms to thread (I tied a knot around the end of the feathers and my pompoms had tiny loops on the them because they were taken off of a keychain, so I tied knots to those. You may need to thread the string with a needle and go through the center of the pompom to attach it). Tie end of thread to dowel, secure with dot of hot glue. Once all strings are attached to dowel, wrap the leather lace around dowel, going over thread, but making sure the strings still hang through. Use a dot of hot glue occasionally as you wrap the leather lace around to keep it secure. Once you’ve covered as much of the dowel as you’d like, secure the end of the leather lace to the dowel with hot glue. 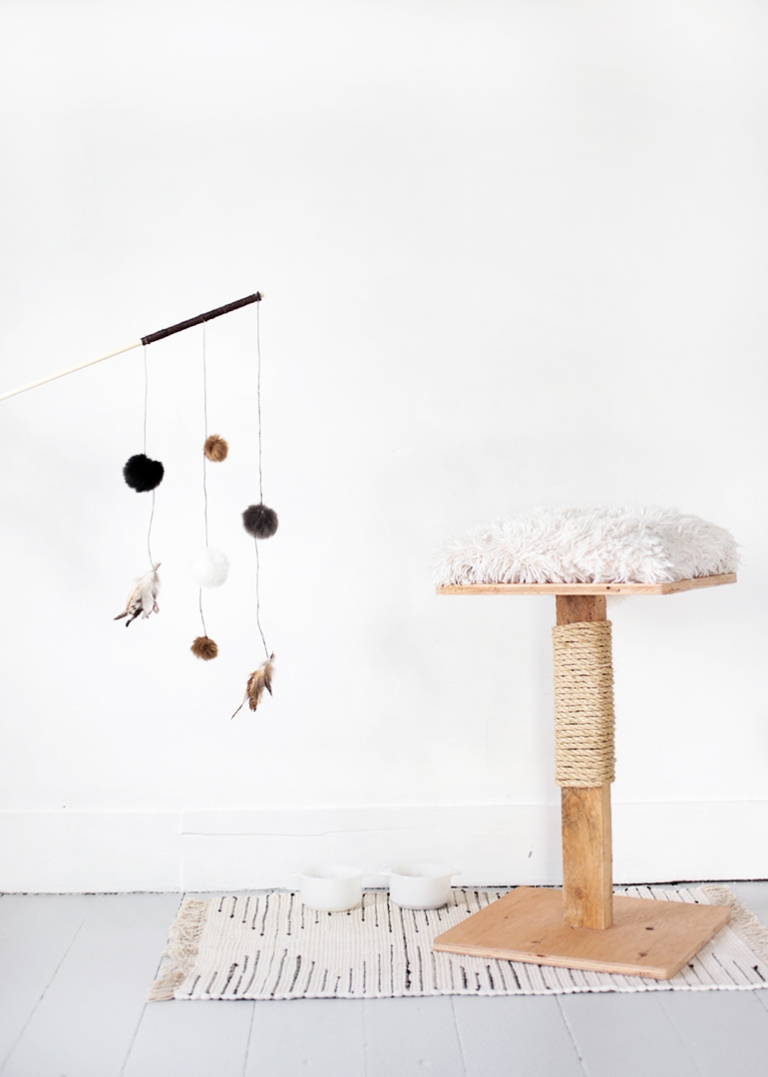 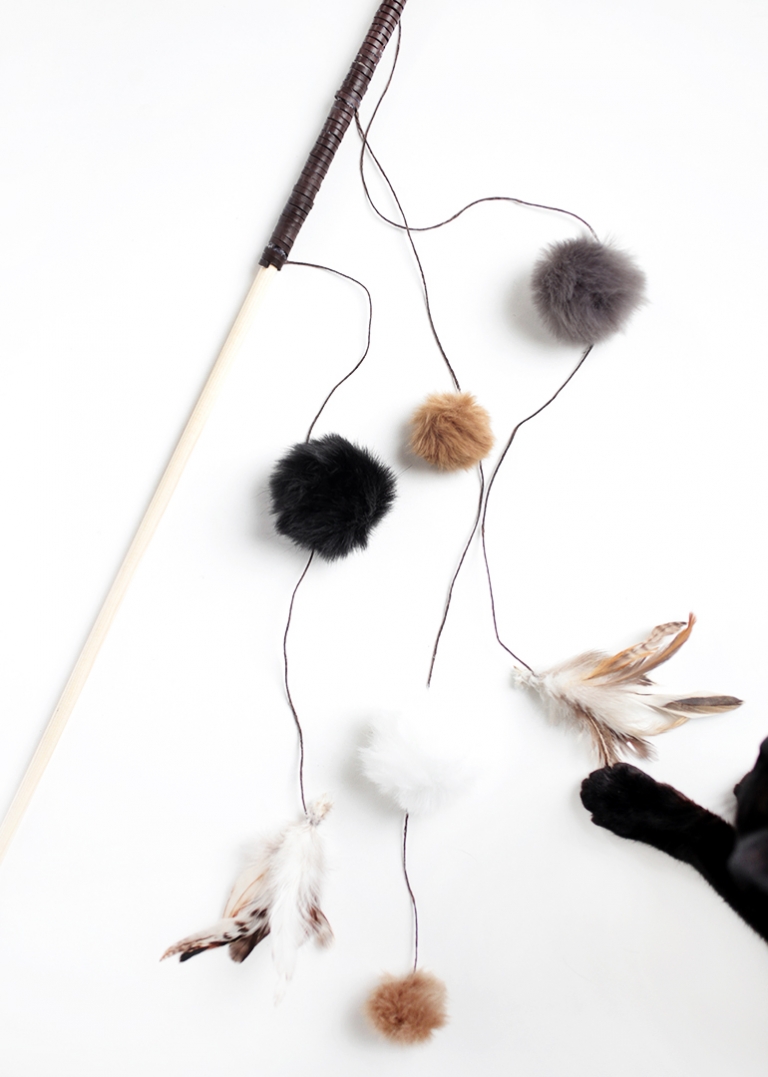 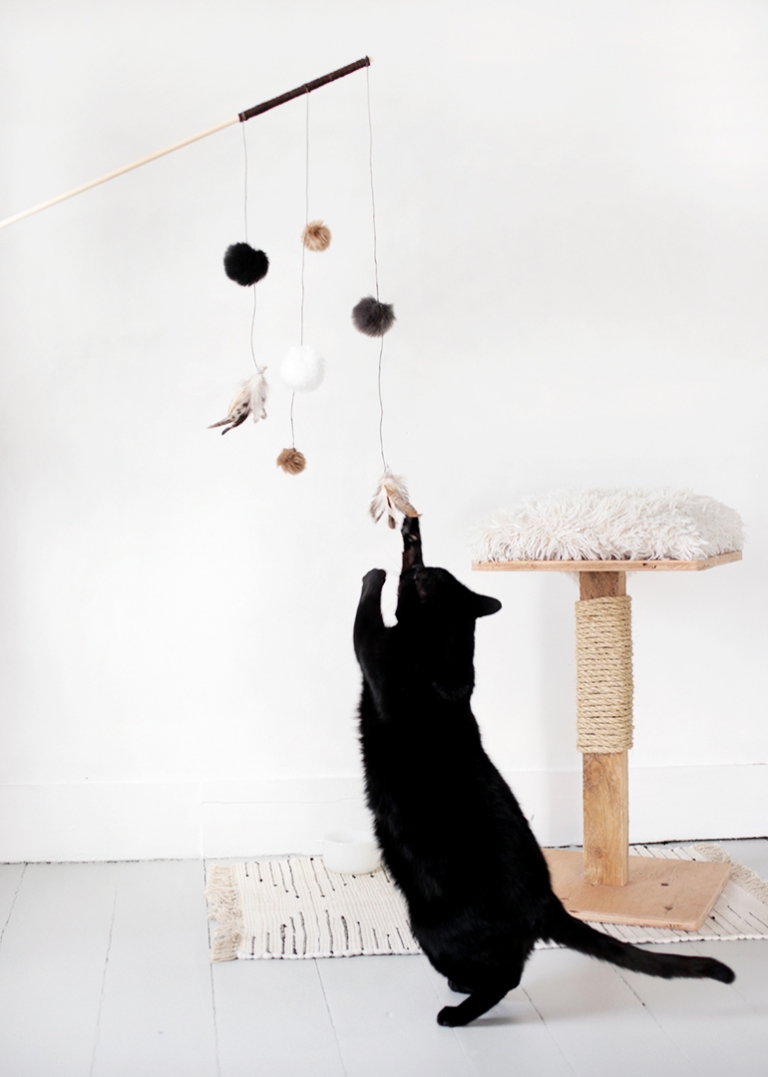 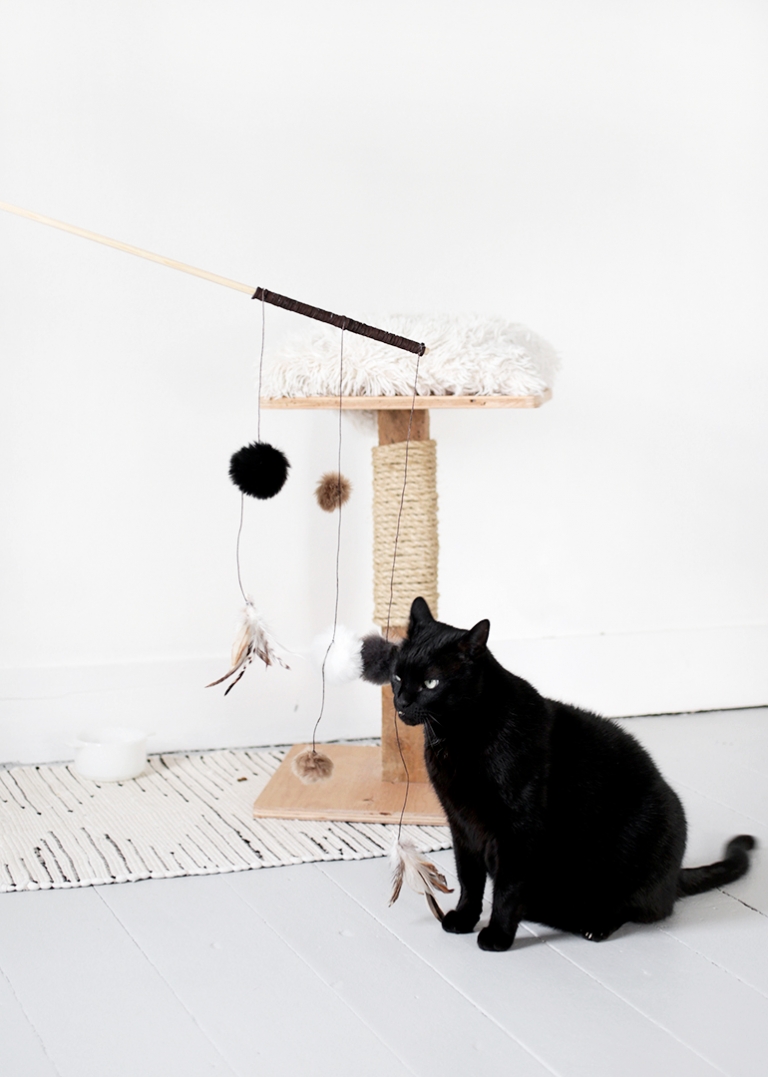 I had to include this last photo – Kitkat did a decent job modeling for his first gig (okay, he made a brief appearance in this post), but he obviously had reached his limit! 😹