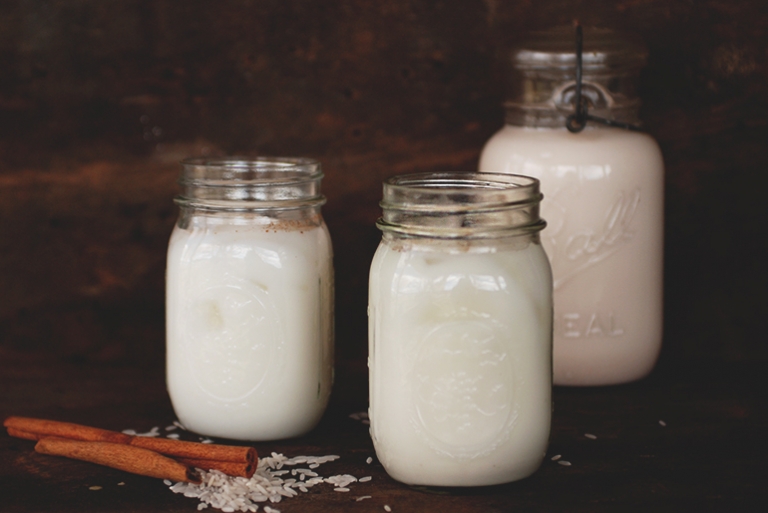 Last fall when we went out to California, my sister and her husband took us to one of their favorite food spots, La Super-Rica. Along with some really delicious food, we ordered horchatas – my first time ever trying one.  For those that have never tried one, it’s a creamy, cinnamon flavored drink served over ice. I loved it and knew that this was a recipe I needed to try to duplicate as we have no where around here that sells horchatas (unless I’m missing something…).  A while ago I had looked up a few recipes and was surprised to learn it was made with rice (I know, I was clueless), and realized that there are a lot of variations out there. And there are a lot of strong opinions on what should & shouldn’t be going into the drink and where exactly horchatas originated from.  I was feeling a little overwhelmed by all that I read, and put off trying to make any.  But now with the weather maybe, just maybe, starting to get a little warmer around here, horchatas started filling my thoughts again.  That and the fact that Cinco de Mayo is coming soon and pretty much all my thoughts start revolving around Mexican food…but then again, they pretty much always do. 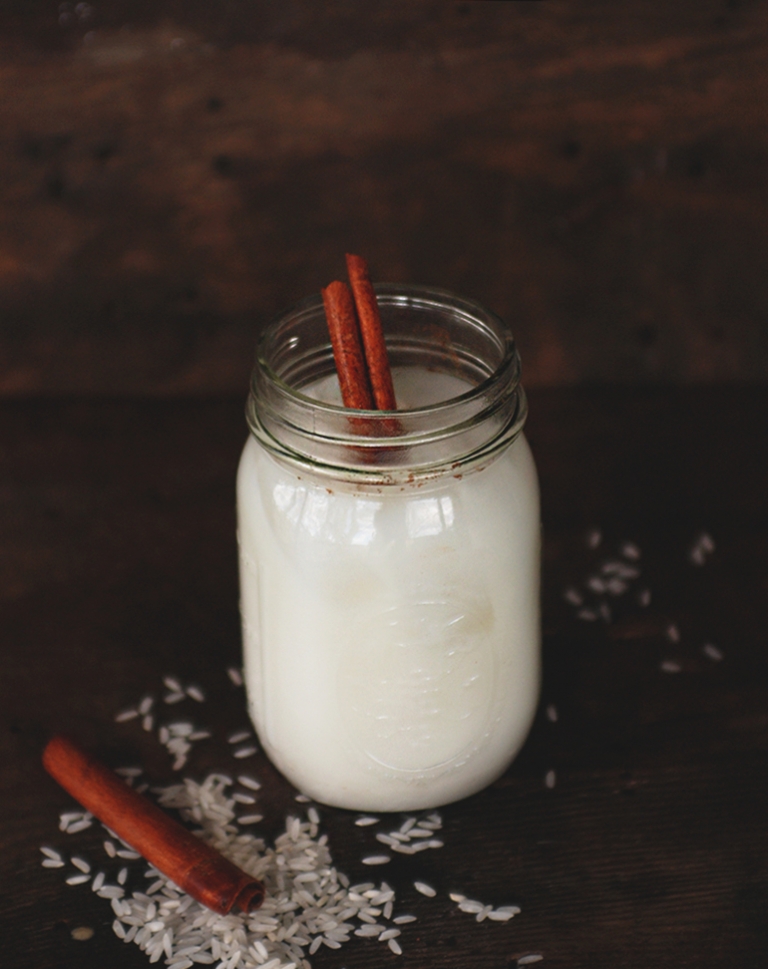 Since there are so many variations on horchata recipes, I thought I would try a few out and pick my favorite of those to share with you.  I will say, if there was a local place where I could grab a horchata from whenever the craving arose, I’d skip making my own and just buy them.  They seem like quite a bit of work for a drink!  Then again, it might have been trying to make three variations of the recipe at the same time.  I made a whole lotta horchata!  If you can’t get them anywhere nearby, it’s definitely worth making though…they are delicious, and come summertime, I’ll probably be making this pretty often.
The recipe that I ended up liking the best is actually the easiest to make (and strain…the straining is the worst part).  A lot of recipes have almonds or some other kind of nut in them.  My favorite did not have any nuts in it, but that’s not too surprising for me as I was making the other two using almonds, and while I love almonds plain (or with chocolate!), I’ve never really been a fan of almond-flavored anything.
I tried the horchata recipes from The Kitchn, NoshOnIt and David Lebovitz.  My favorite was the one from David Lebovitz.  Mike also liked this one best too.  My parents liked both the recipes from David & NoshOn.  So did the boys.  The recipe from The Kitchn seemed like it was missing something, maybe because the only sweetener was sweetened condensed milk and there was no sugar in it?  I think if you’re a fan of almond flavored things, the recipe from NoshOn would be a hit.  However I think that was very, very sweet.  I’d go easy on adding the simple syrup, tasting as you go.  And the mixture was definitely harder to strain when it had almonds in it as opposed to just rice & cinnamon.  But the straining is key!  If it’s not strained well enough, the mixture seems a bit more chalky.
I made a couple very minor changes to the recipe I liked best, just to enhance the cinnamon flavor. Although this recipe does have milk in it, the milk can easily be subbed with water and the drink would be dairy free.  (The recipe from NoshOnIt did not have any milk in it). 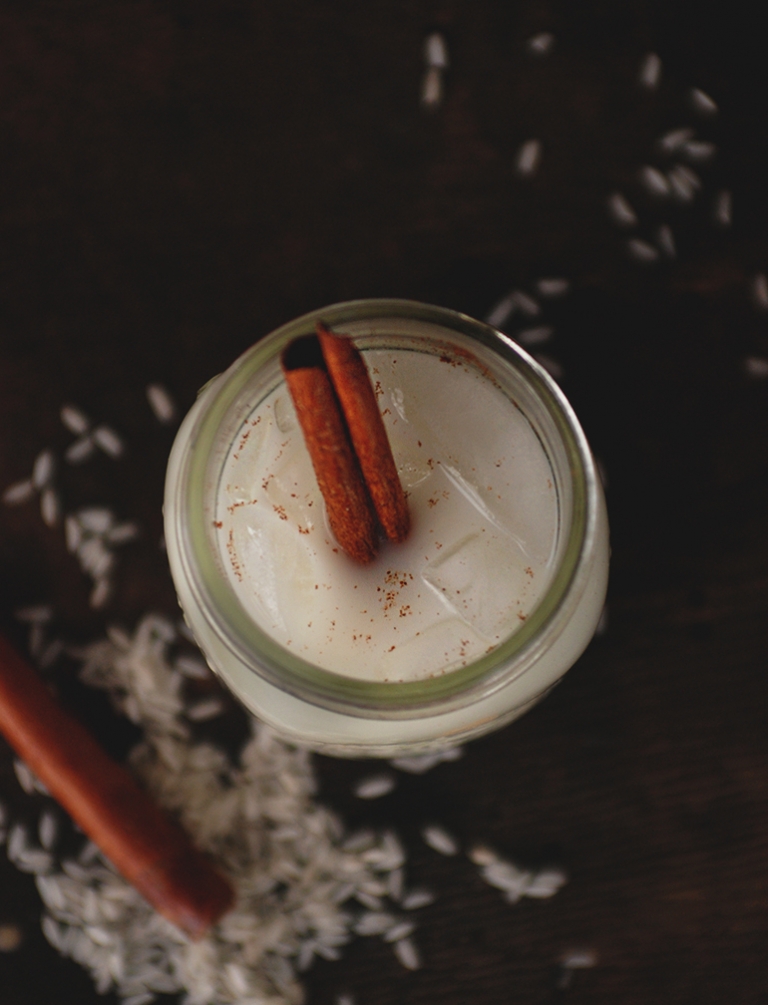 In a blender (I used our coffee grinder), grind the rice until very fine. Transfer the rice to a bowl or jar then pour warm water over it and add the cinnamon stick. Cover and refrigerate at least eight hours, but preferably overnight.

In a blender, puree the rice, water and cinnamon stick until it’s as smooth as possible (the cinnamon stick will blend, it softens as it soaks, however you can remove it before blending if you’d like). Strain the mixture through a fine mesh strainer lined with 2-3 layers of cheesecloth, pushing on the solids with a spoon or spatula to extract as much liquid as you can.

Stir in the sugar and milk, mixing until the sugar is dissolved. Taste, and adjust sweetness, if necessary. Refrigerate until completely chilled. Serve over ice with a sprinkling of ground cinnamon on top. Store the horchata in the refrigerator for up to four days.

*Replace milk with water to make this dairy free. 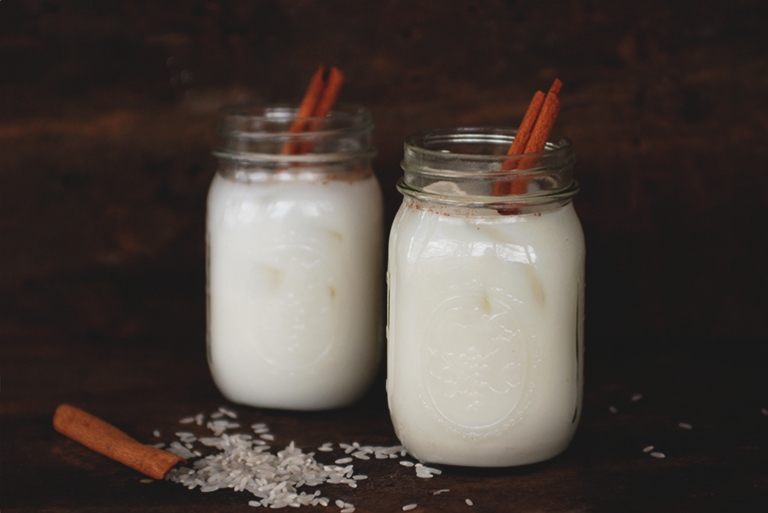 If you try one of the recipes out, I’d love to know what you think.  And if you’ve made horchatas before and have a favorite recipe, I’d love to try it, let me know!

Well, I caved and we turned on our heat before Nov

Are you team messy throw blankets or neatly folded

Most of the time, I feel like I’m just barely ge

When’s the last time you remembered to check you

Little bits of fall showing up around the house…